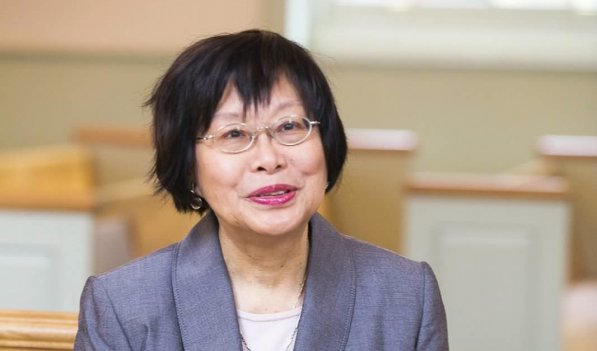 Son-Mey, as is so often the case with people at Pilgrim, you found your way to this church from a religious background that is quite different by comparison. Tell us about it.

I was raised in a traditional Chinese family in the Buddhist tradition. I became a Christian at the age of 21 in Hong Kong after learning about Jesus from some American missionaries. My parents were not pleased and they strongly objected to my decision.

Defying your parents in a traditional Chinese family is bold, to say the least. What was is about Christianity that led you to go against your parents’ wishes?

I became a Christian because the Christian God through Jesus Christ offered me a personal salvation from my failings and imperfections. I saw in Jesus’s teachings a promise of love, joy and peace which could not be obtained from the philosophies of Confucius and Buddha.

So how did you arrive at Pilgrim?

Like many people do, my family engaged in “church hunting” for a few months. Pilgrim stood out because it was small, friendly, and welcoming for people of all religious backgrounds. It also offered a great educational program for our children. That was back in 1987, but all those things continue to be true today. That said, I am not the same person—and not the same Christian—that I was when I arrived at this church.

When I became a Christian, I was influenced by more conservative sects of Christianity. Pilgrim is such an open, tolerant, accepting place that as I looked back, I realized I had been prejudiced in my earlier days as a Christian. More than ten years ago, there was a discussion at Pilgrim on the inclusion of gays and lesbians in the church—whether we were called to become an Open and Affirming church and welcome people of differing sexual orientations and identities. I began to think about what Jesus would do if He lived in modern times. I was sure he would reach out to gay people as he had reached out to marginalized people and Gentiles in his times. Through that experience and others like it, I became more tolerant of people of different backgrounds…people of other faiths or no faith at all. This church has helped me more fully understand the Jesus that I was drawn to in my youth.

You mentioned your children. What influence do you think Pilgrim has had on their lives?

My children were very much involved in the Sunday School and mission trips here. I am happy to say they continue to love and serve God by loving and serving others. Pilgrim played an important role in the development of their faith.

What about your own faith? What feeds your spirit?

Music that inspires my worship. Sermons that provoke my thoughts. Christian fellowship that nurtures my heart. The sacred and religious music here in particular has inspired and moved me to deeper meditation and to a closer bond with God. And the preaching is both relevant to uncovering biblical truths and to the needs of modern society.

How have you seen God’s presence in your life?

God has enabled me to forgive and reconcile with several significant people in my past who had hurt me deeply. Now I am able to live happily and peacefully in the present, savoring every moment of my life.

An Open and Affirming Congregation of the United Church of Christ