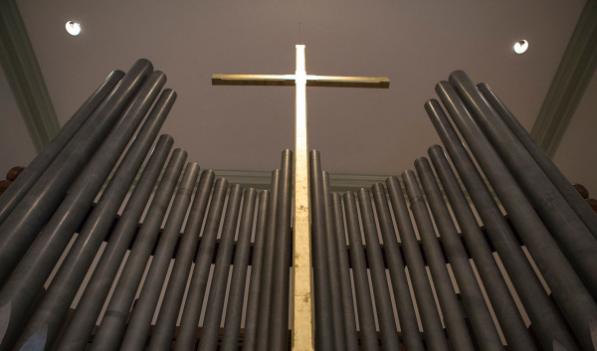 In the late 1950s, many area churches were bursting at the seams. Hancock Congregational Church in Lexington was no exception, having more than 2,000 members. In April of 1957, Hancock formed a committee to consider establishing a second Congregational church in Lexington. An overwhelming majority of church members voted in favor of the plan, and in July of 1958, the new church was incorporated as “Pilgrim Congregational Church.” Pilgrim Church was born and our first settled pastor, the Rev. Whitmore Beardsley, was called in November.

While searching for a permanent home, the fledgling congregation worshiped in other churches in town and the Jewish Community Center. Eight acres on Coolidge Avenue was purchased and the firm of Royal Barry Wills was hired to design a colonial-style church. The Hancock Church Building Fund allocated funds to support our new congregation, and groundbreaking took place in November, 1960. The sanctuary was dedicated in January, 1962. Lodged in its permanent home, Pilgrim has grown in the faith ever since.

Some of the notable events in the Pilgrim Congregational Church United Church of Christ history include:

An Open and Affirming Congregation of the United Church of Christ